Why Most Startups Choose Ruby on Rails for the Backend

In this article, we’d like to share our advice on how Product Managers can onboard remote developers and set them to work as members of the team from the first day.

Are you a startup owner planning to roll out something new to the market? Wondering what technology is the best for the backend? There are plenty of technologies to choose from e.g. Ruby, .Net, Java, Python. All of them can implement the same functionality.

When choosing among them most startup owners want to find the one that not only implements the functionality but allows doing it in the most efficient way. You need to cut down costs to a minimum and reach out the potential clients as soon as possible before someone else does.

Why do we most often advise to consider RoR for developing your project? How does it help startups in going forward with their product? This post will dot the I’s and give you a quick overview of RoR advantages for launching the backend part.

A look at the backstage

Released in 2004, Ruby on Rails or RoR was originally conceived out of Basecamp (a project management tool) by David Heinemeier Hansson. Its heart lies in Model View Controller architecture that separates data from the logic i.e. presentation layer and thus helps in organizing the application program. Its blood and muscle is an extensive AJAX library, which RoR uses to generate AJAX code and process the required Javascript automatically.

Translating it into a business language, RoR framework is a mature product that has already deserved the credit of both development and business community. It advocates for simplicity, ease of deployment, and consistency.

Let’s take a close look how it helps startups or small business address their challenges across different aspects.

If you look at yesterday's startups, which are today the leaders of the industry, e.g. Linkedin, Twitter, Zynga, and of course Facebook with Google, you’ll see that they rarely switch from the core technology. The more they grow, the more difficult it becomes to change the initially chosen path.

However, Ruby on Rails framework takes a separate place in the row of start-up technologies. It has not only a flexible toolkit for "quick and dirty" project launch but also excessive performance optimization capabilities. For this reason, many startups decide to go with Ruby on Rails for their products – launch quickly and enhance without a problem. 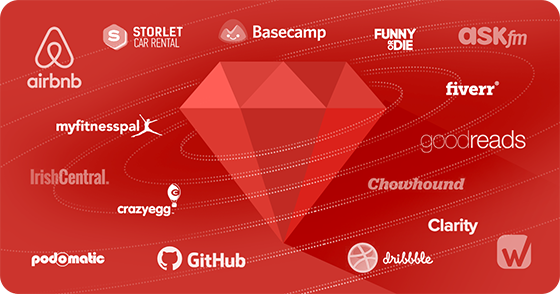 Ruby on Rails advantages for startups

Ruby on Rails is favored among both startups, non-profit organizations and large businesses. However, it is primarily an infrastructure, so the environment is great for any type of web application, be it a collaboration platform, community support, e-commerce business, content management or statistics.

See also: What type of projects you can easily build on Ruby on Rails

For every startup speed matters. And Ruby on Rails is truly one of the most powerful frameworks for developing web applications quickly. The fact of superiority over any other framework in terms of speed can hardly be argued.

If you need to quickly roll out a quality product to the market, RoR is your best choice. If you need an experienced RoR team, get in touch. We know how to develop complex sites and web applications on Ruby on Rails.

Need support in RoR development? We are ready to help! Get a free consultation